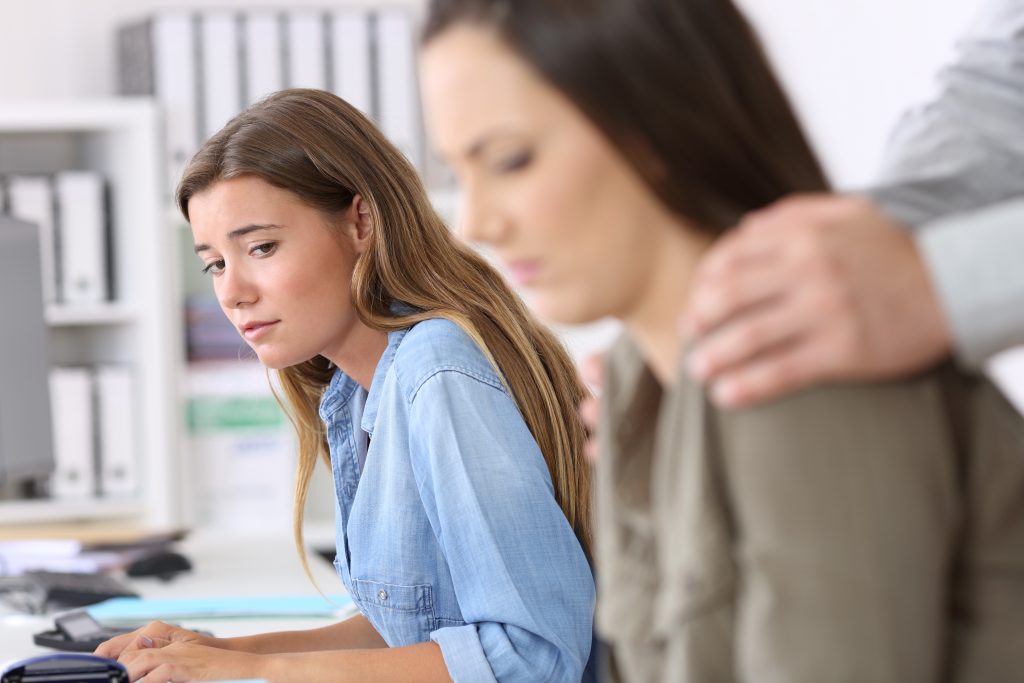 Confronting a potential incident of sexual harassment can be difficult. There are times confrontation is not possible, in which case going directly to the supervisory chain is preferable. And remember to document, document, document.

However, it is amazing how much one can handle at the lowest level, having a conversation to let people know what is and is not acceptable. When having these conversations, we tend to speak in one of three voices: Aggressive, Passive, or Assertive.

When I finally decided to confront my own harasser, I used the Aggressive Voice. It is how I am personally hardwired to handle conflict situations. Although he got the message that I would not tolerate his conduct, I did not change his behavior for others. He simply labeled me with the “B” word and pursued other, less aggressive women. Those who approach these difficult situations with an aggressive voice may want to first try turning down the volume to become more effective.

Yet, the far worse approach in a sexual harassing situation is the Passive Voice, which is not only often not heard but can confuse the intended message. Not speaking up or voicing an objection can even send a message that you are either OK with it or that you will not do anything to stop it. Those who approach these difficult situations with a passive voice should consider turning up the volume. They need to find their Assertive Voice.

The Assertive Voice expresses your point of view while respecting both self and others to achieve a desired response. Had I taken a more assertive approach with this person, stating that his behavior was not acceptable to me or anyone else and that if it continued I would report him, I may have saved others from experiencing his sexual harassment. In fact, had I explained why it was offensive, he may have stopped on his own instead of having to be reprimanded by his supervisor, which did finally occur.

When sending a message, whether aggressively, passively, or assertively, it is important to consider what makes that message impactful. Any message is made up of three components: the Verbal, the Visual, and the Vocal. The words (the Verbal) only comprise 10 percent of the message’s impact. The nonverbal (the Visual) and the tone—how we say it (the Vocal)—make up 90 percent. That means how we carry ourselves—our walk, our posture, our dress—speaks volumes. The tone of our voice can drown out our words. The good news is, no matter how we are hardwired, whether aggressive or passive, we can learn how to adjust our volume in a certain situation to become assertive, to become effective.

We can teach employees about sexual harassment: what it is and how to report it, but where we can make the biggest impact is providing every employee with the tools and techniques to handle issues at the lowest level, in a prevention mode. Teaching how to speak in the assertive voice is worth the training bucks.

To become naturally assertive in all instances is possible but does come with a prerequisite: To be genuinely assertive, you must respect yourself and others; you must have respect for your own self-worth and dignity. Women Deserve Better Contributor Joyce McCauley-Benner offers encouragement to those on the road to healing: “It is also important to recognize that experiencing trauma and abuse including assault makes having this prerequisite challenging. But know that starting the healing process, finding your voice, and reclaiming your power, leads to rediscovering your self-worth and dignity.”

What to Do If You Have Been Sexually Assaulted

Maternity Leave and Your Career Path